A Closer Look at the Crisis in Venezuela: COVID-19 is Impacting the Worst Humanitarian Crisis in the Western Hemisphere 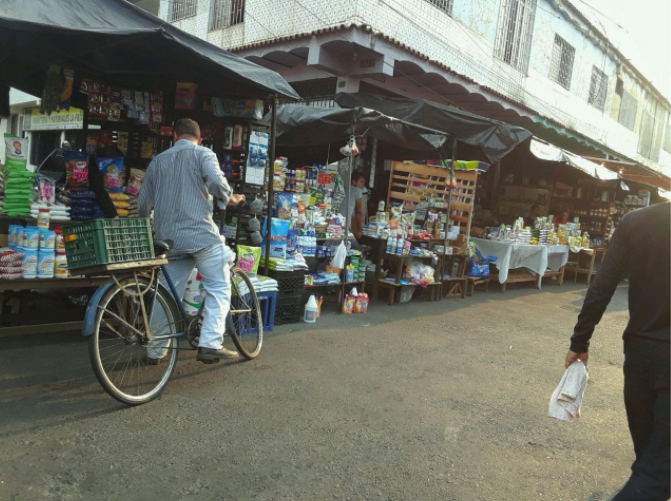 Venezuela is currently the epicenter of the largest humanitarian crisis in Latin America. Once considered one of the richest countries in the region due to its oil reserves, Venezuela has moved toward the brink of economic collapse over the past two decades, with conditions worsening rapidly since 2014.
More recently, international organizations have been reporting chronic shortages in access to food, power, healthcare and jobs.
The ongoing socio-economic and political crisis in Venezuela continues to result in severe gaps and shortages in basic service provision and has led to over 5 million displaced people. The 2020 Humanitarian Needs Overview and Humanitarian Response Plan for Venezuela estimates that there were 7 million people in need in 2019. Currently, an already fragile situation has only been exacerbated by the onset of the global COVID-19 pandemic as well.

Local data can help better allocate resources to those who need it the most. However, local political conditions deter international aid organizations and NGOs from collecting this type of information. Because of this, there is a need for innovative solutions like Premise to help local organizations get the data they so desperately need.

Premise has the capability to crowdsource sentiment data through our network in Venezuela. Local citizens answer surveys and provide important information on their knowledge, attitude and perception of certain topics to help key decision-makers distributing aid navigate the challenging climate within the country.

Premise’s proprietary data includes a series of surveys on a variety of topics that helps to paint a picture of daily life in each of our country networks. The newest versions of these surveys have been collecting data on a monthly basis since January 1, 2020. In this blog, we will examine Premise's data on key themes such as government, law enforcement, livelihoods, healthcare and food security through the lens of gender to help understand the current situation in Venezuela. This is in line with a larger initiative from UN OCHA to increase gender-based analysis of data in the humanitarian space as a critical means to understand impacts and assure equitable service delivery. We also hope to demonstrate whether or not COVID-19 has indeed acted as an amplifier of the humanitarian crisis.

Premise has collected almost 30,000 responses on surveys that ask contributors for their sentiments on their national and local government.

One relevant learning is that 71% of contributors disagree or strongly disagree that their national and local governments are establishing public policies that enable a satisfactory standard of living for citizens and that the government is providing vital services, such as clean water and reliable electricity, in a satisfactory manner. In March 2020, there was a noticeable spike in negative sentiment responses possibly suggesting that the onset of the coronavirus pandemic only served to strengthen an already pessimistic view of the government’s ability to enact effective responses to the needs of the public.

Following a similar pattern, over half of respondents agreed or strongly agreed that foreign intervention and/or NGO work is required to ensure basic services and security in Venezuela, and 62% disagree or strongly disagree that their local government is preparing for future disasters or emergencies. This echoes a similar attitude regarding the ineffectiveness of government, with an observable uptick in March as COVID-19 began to spread globally. Many stable country governments are currently struggling to deal with social, economic and political ramifications from coronavirus, and so it stands to reason that these effects will only be magnified for a country in turmoil. 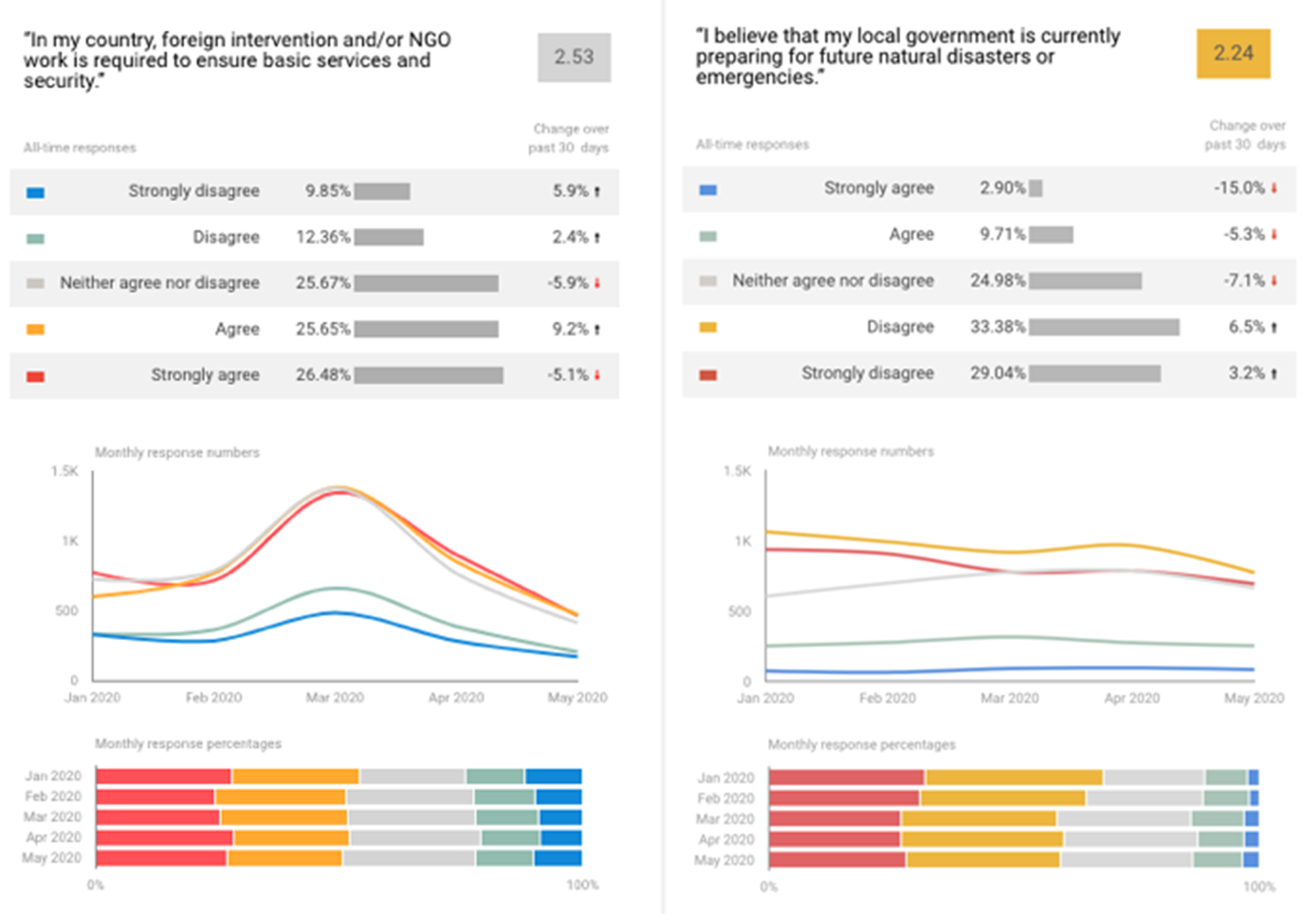 Premise has collected just over 45,600 surveys on the topic of gender and social equality, as well as jobs and livelihoods, since January 1, 2020.

The initial outlook on gender equality is high among our Venezuelan contributors with around 80% of respondents agreeing or strongly agreeing that women have the same social and political freedom as men, and 75% affirming that women enjoy the same career opportunities as their male counterparts. When disaggregated for gender, however, men scored 3 to 6 percentage points higher regarding positive outlooks on gender equality in Venezuela.

Women report a higher dissatisfaction with the economy than men

A similar pattern emerged when looking at sentiments on the Venezuelan economy. Overall, over half of respondents said they were dissatisfied or very dissatisfied with current economic conditions. 64% disagreed or strongly disagreed that there were enough good quality jobs available, and 80% of people felt that the number of people asking for food or money in public had increased or greatly increased over the past year. Women’s responses on average were 4 to 12 percent higher when it came to dissatisfaction with the economy. For example, 70% of women thought there were not enough well-paying jobs in comparison to 58% of men.

Women report a higher dissatisfaction with the economy than men

A similar pattern emerged when looking at sentiments on the Venezuelan economy. Overall, over half of respondents said they were dissatisfied or very dissatisfied with current economic conditions. 64% disagreed or strongly disagreed that there were enough good quality jobs available, and 80% of people felt that the number of people asking for food or money in public had increased or greatly increased over the past year. Women’s responses on average were 4 to 12 percent higher when it came to dissatisfaction with the economy. For example, 70% of women thought there were not enough well-paying jobs in comparison to 58% of men.

Food Security and Access to Healthcare in Turmoil for Venezuelans

Before the pandemic hit, due to the ongoing humanitarian situation, the Venezuelan health system was already in crisis. Many countries are currently struggling with the burden of addressing COVID-19, so it is imperative that we pay particular attention to countries that are even less equipped to handle this threat to public health.

Female respondents also displayed heightened health concerns about the COVID-19 pandemic as well. In a separate survey, when asked about levels of concern about the coronavirus, a higher percentage of women reported being very concerned in comparison to men. When asked specifically about access to healthcare services should they contract COVID-19, 66% of men responded as concerned or very concerned in comparison to 80% of women.

Women are often tasked with domestic duties, including cooking and shopping, and therefore may be more attuned to fluctuations in the price of food and other goods. Of the 28,650 responses on the topic of food security, 63% of respondents disagreed or strongly disagreed with the notion that food prices did not fluctuate often, with 59% of men and 67% of women responding in this manner.

Overall response to perception around prices to food fluctuating often 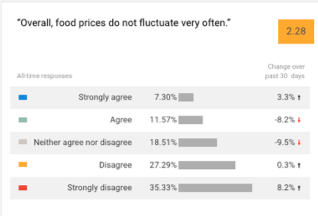 Men’s response to perception around prices to food fluctuating often 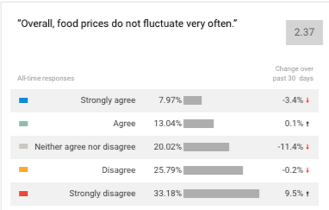 Women’s response to perception around prices to food fluctuating often 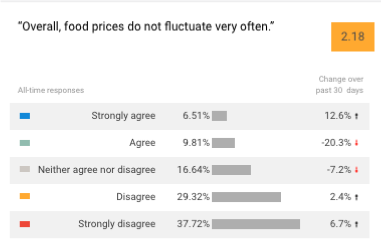 Lack of access to food and medical supplies has been one of the most pressing issues facing Venezuelans during the period of economic decline, so Premise continues to collect longitudinal sentiment data on these issues to track changes over time.

As part of the JuntosEsMejor Challengefunded by the United States Agency for International Development (USAID) and Inter-American Development Bank (IDB), Premise was selected as a grant recipient to help provide innovative solutions to the humanitarian crisis that has been compounded by COVID-19 in Venezuela.

We are currently collaborating with international experts on information management in the humanitarian space, as well as Code for Venezuela, a technology non-profit formed by the Venezuelan diaspora focused on solving Venezuela’s most pressing needs. Our goal is to collect up-to-date data for international and national non-governmental organizations that would help them make more informed decisions and deliver better basic services to Venezuelans. We will continue to share more insights and stories about our work on this project.

Thank you to our awardee Premise Data for this piece.